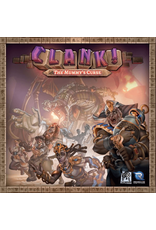 Untold riches await inside the pyramids of the Ancients — but they are well protected. An undying Mummy guardian spreads a vile curse to those who would rob its tomb. And, inevitably, the treasure has attracted a dragon. Can you escape the fearsome Croxobek?

Clank! The Mummy's Curse adds a wandering mummy to the pathways that players will explore, as well as new artifacts to acquire in the depths of the pyramid! Will you avoid the Mummy and risk curses, or defeat it and avoid them?!